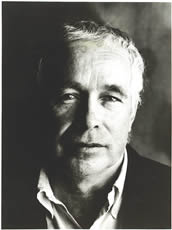 Howard Hodgkin was educated at Bryanston School in Dorset. He then studied at the Camberwell Art School and later at the Bath Academy of Art in Corsham, where Edward Piper studied drawing under him. His first solo show was in London in 1962. His early paintings tend to be made up of hard-edged curved forms in a limited number of colours. Around the beginning of the 1970s, his style became more spontaneous, with vaguely recognisable shapes presented in bright colours and bold forms. His works might be called "semi-abstract", and are often compared to Henri Matisse.

Hodgkin's paintings often seek to convey memories of encounters with friends and frequently carry titles alluding to specific places and events such as Dinner at West Hill (1966) and Goodbye to the Bay of Naples (1980–82). Hodgkin himself has said that he paints "representational pictures of emotional situations".

His prints are hand-painted etchings and he has worked with the same master printer (Jack Shirreff at 107 Workshop) and print publisher (Alan Cristea Gallery) for the last 25 years.

Despite their apparent spontaneity and usually small scale, many of Hodgkin's paintings take years to complete, with him returning to a work after a wait and then changing it or adding to it. He often paints over the frames of his pictures, emphasising the idea of the painting as an object. Several of his works are on wooden items, such as bread-boards or the tops of old tables, rather than canvas. A number of his works not shown in frames are surrounded by rectangles of simple colour.

In 1984, Hodgkin represented Britain at the Venice Biennale, in 1985 he won the Turner Prize, and in 1992 he was knighted. In 2003 he was appointed by Queen Elizabeth II as a Companion of Honour. A major exhibition of his work was held at Tate Britain, London, in 2006. Also in 2006 the Independent declared him one of the 100 most influential gay and lesbian people in Britain