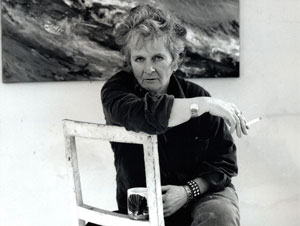 Hambling is openly lesbian and a bias can be seen in her choice of subjects for portraits over the years, including Derek Jarman, George Melly, Stephen Fry and Quentin Crisp. In the late 1990s Hambling had an intimate relationship with the 'Soho beauty' Henrietta Moraes as Moraes' life was drawing to a close. Hambling described her as her muse.[4]

In 2003 Hambling was commissioned to produce a sculpture to commemorate Benjamin Britten. The result was Scallop, a pair of oversized, 12 ft high, steel scallop shells installed on Aldeburgh beach. Hambling describes the piece as a conversation with the sea:

"An important part of my concept is that at the centre of the sculpture, where the sound of the waves and the winds are focused, a visitor may sit and contemplate the mysterious power of the sea,"[5]

The sculpture has caused some division amongst the local community with some complaining that the sculpture obstructs the view or is an eyesore that should be moved to Snape, whilst others say that it enhances the view and is a fitting commemoration of Britten that helps to attract tourists. In the first three months of 2004, the sculpture was twice vandalised by pouring paint over it and a poll in the local paper was held to decide whether it should be moved, although the result was 2,163 to 738 in favour of keeping the statue.[6] The sculpture has been compared with Nissen hut wreckage or a kitsch mantelpiece ornament. Hambling did not herself make the sculpture: it was produced by a local foundry from a four-inch model supplied by the artist.

Maggi Hambling, who recently gave up smoking, is also involved in the campaign against the total ban on smoking in public places in England scheduled for 1 July 2007. Speaking at a news conference at the House of Commons on 7 February 2007, she said: "I wholeheartedly support the campaign against a ban on smoking in public places. Just because I gave up at 59, other people may choose not to. There must be freedom of choice, something that is fast disappearing in this so-called free country."